A downloadable game for Windows and macOS

'Yumi-Geiko' is a game which you can simulate bow and arrow practice by key-board control.

The practice will be proceeded its stage from shooting straw post to aiming the target. There are 3 targets in different distance. Nearest one is available to challenge at the beginning.

You can change the settngs of archery tools, and control sensitivities in option menu. This make for variations of your feeling and actual accuracy. Especially, 'Bow weight' and 'Raw Input' are interest settings, recommended to change once.

This game has functions to analyse your result every time you shot arrows. Some functions take statictics throughout your play, some are to be reset when you change target. Otherwise, you can also challenge achievements including a little unique requirements.

You can draw the bow to the full just by holding QWOP keys, so long as the key sensitivity balance is managed. And release the all keys to shoot an arrow.

Key sensitivity balance can be managed by sliders in OPTION / Manipulation. But for aiming with delicate manipulation, it would be nicer if you control everything by your own, that is, make flat the balance settings by sliders, and control the timing of holding each keys.

Duration of holding keys relate to joints keep changing its angle. Even if the joint's angle went through excessive, there is no way to revert it. In most cases, best opportunity for release an arrow comes only once in shooting action. Press space key and retry.

Pushing key is also managing that put strength into joints. After release keys, joints lose strength gradually, and arms are bent by bow weight and gravity. You can keep strength on joints by pushing keys intermittently no matter how short about each repetition.

Aiming in a vertical direction is owing to locating of arms, and in a horizontal direction, it is owing to 'Tsunomi'. With Japanese bow, an arrow is put to right side of bow, and fly out toward right. However, if you push the bow on right side well, the bow will turn in the process of accelerating an arrow. The arrow fly straight as a result. This technique pushing a bow called 'Tsunomi', and what the bow turning after release is called 'Yugaeri'.

Effect on the aim horizontal direction by 'Tsunomi' and 'Yugaeri' derives from how much strength put into the joint of left elbow until just before releasing an arrow.

There is a slider which changes the effect of 'Tsunomi' in OPTION / Manipulation. The larger value, the more effectivity of 'Tsumomi / Yugaeri' obtained with lower strength put into the elbow. 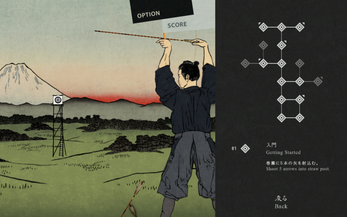 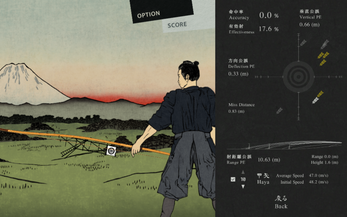 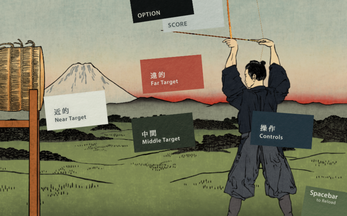